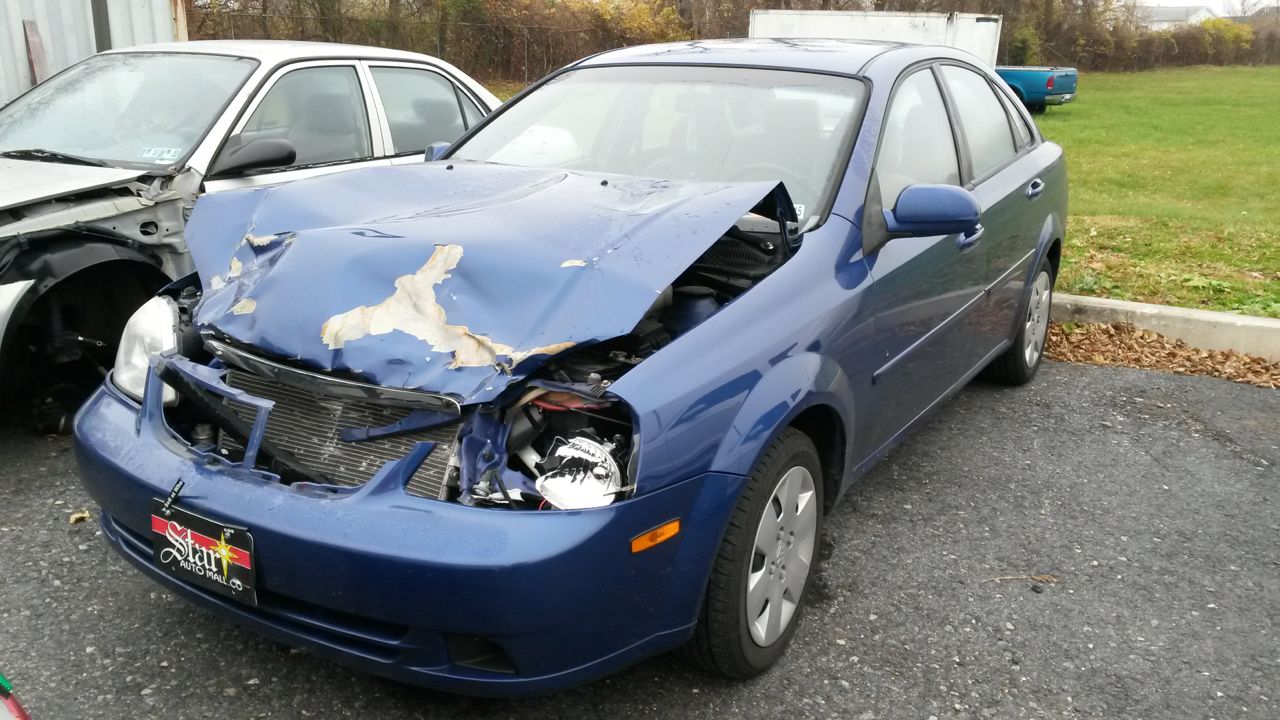 Angels watching over me

After spending a lovely evening of cooking dinner, writing thank-you notes, going for a walk and watching a movie with my fiance, something completely unexpected happened.”

I had been driving on I-78 for about 10 minutes, singing along to Hunter Hayes’ “Wanted,” when I rounded a corner and an unusual movement caught my eye. Next thing I know, my little Suzuki is right on top of the big momma deer that happened to be in my lane..

… my hood crumples and she goes flying straight up into the air, right over my car and the car behind me, smacking onto the pavement on the side of the road. I manage to steer off to the side of the highway, smoke swirling out of my now-exposed engine and windshield wipers going like crazy (in my shock, I smacked everything around the steering wheel trying to find the turn signal so I could safely exit my lane, thus turning on the wipers full blast). The girl who was driving behind me didn’t have a scratch on her car and she stopped to make sure I was ok. She left and the realization of what had just happened began to set in, triggering a mini freakout. I called my fiance and he dropped what he was doing to meet me (did I mention how awesome he is?). The necessary calls were then made to the police, AAA and my Dad and we had my car towed away while my wonderful fiance gave me a ride home.

In hindsight, I believe that my car was surrounded by angels that night.

I mean, what else could’ve kept that deer from coming through the windshield (causing even more damage or even critically injuring me)? It had started to roll up my car’s hood and then suddenly shot high in the air; high enough to get over 2 cars and land way off on the side of the road (out of the way of oncoming traffic).

The only explanation I have is God’s angels! The Bible states:

“Are they not all ministering spirits sent forth to minister for those who will inherit salvation?”
Heb. 1:14
” For He shall give His angels charge over you, to keep you in all your ways.
In their hands they shall bear you up, lest you dash your foot against a stone.”
Psalm 91:11-12
“The angel of the Lord encamps all around those who fear Him, and delivers them.”
Psalm 34:7

While I haven’t personally seen a healing happen before my eyes or had one of those incredible visions from God, I have had angelic experiences throughout my entire life (angels kept me quiet and occupied while Mom dealt with a fish tank disaster – I was just under a year old; there have been car crashes that could’ve ended really badly; hiding my keys on me so I would be a couple minutes late, missing the multi-vehicle accident; and more).

All I can say is that God must have something big planned for my life, someone He wants me to impact personally, something He wants me to do to further His kingdom. It’s the same for all of us! He is faithful in His promises and will never leave us nor forsake us. When he says that He will send His angels to guard us, it’s not a lie. We are surrounded by His protection day in and day out.

Trust Him. He won’t let you down.

On the brink of adventure!